Ultraman Will Crossover with Marvel Super Heroes for the First Time in Upcoming Comic Book Miniseries! 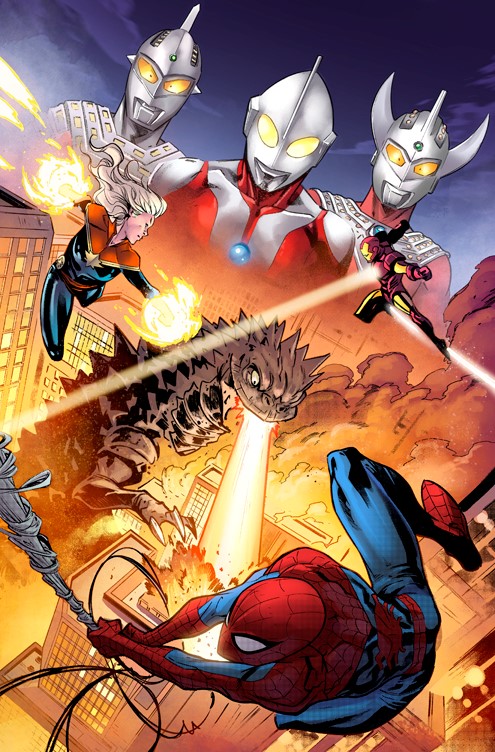 Schuwatch! Avengers Assemble! Tsuburaya Productions and Marvel Comics have announced a major comic book crossover miniseries featuring heroes from the Marvel Universe entering the Ultraman Universe. The announcement was made by series co-writer Mat Groom before a cheering crowd in the Main Event Hall during Anime Expo 2022 at the Ultraman Arrives: Super Anime Extravaganza at the Los Angeles Convention Center.

This will be the first time that the celebrated Giants of Light, Ultraman and Ultraseven, and their Kaiju foes will appear side by side with Spider-Man, Iron Man, Captain Marvel, and their super villain nemeses.

The as-yet untitled Ultraman/Marvel Universe crossover will be the fourth title to come out of the collaboration between Tsuburaya Productions and Marvel Comics. Previous series include The Rise of Ultraman, The Trials of Ultraman, along with the much-anticipated upcoming series The Mystery of Ultraseven, on sale this August. Fans have been clamoring for a meeting between these unique sets of heroes, and so Marvel’s Editor-in-Chief C.B. Cebulski, VP & Executive Editor Tom Brevoort, Transmedia Producer Jeff Gomez and series co-writers Kyle Higgins and Mat Groom have come together to make this happen. The deal was negotiated by Danny Simon of The Licensing Group.

The crossover series will take place within the continuity of the current Marvel Ultraman comics, drawing on thematic comparisons between the stoic heroism of the Ultras and Marvel’s Earthly champions. No Kaiju or super villains were announced, but concept art unveiled during the Anime Expo event teased classic spiked Kaiju, Bemular. Further details of the storyline are still under wraps.

Created by Eiji Tsuburaya in 1966, the Ultraman series have spawned an evergreen franchise in Japan, making the 40-meter-tall silver and red being from the M78 Nebula one of the most widely recognized characters in the world. In addition to over 1400 episodes and dozens of feature films, Ultraman is on the rise worldwide.

A second season of the ongoing anime ULTRAMAN recently dropped on Netflix, a feature in production with ILM and Netflix, dozens of North American licenses have been activated, live events stream on fan hub Ultraman Connection, and millions of fans subscribe to the Ultraman Official YouTube channel. Live-action feature Shin Ultraman is currently breaking box offices records in Japan.

The Ultraman and Marvel Universe comic book crossover is set to premiere sometime in 2023.

Tsuburaya Productions Co., Ltd. is an independent television and film production company founded in 1963 by well-known special effects man Eiji Tsuburaya. Their most famous program is the Ultraman TV and film series, begun in 1966, has been seen in over 100 territories worldwide and has spawned over 3,000 licensed products. Besides Ultraman, Tsuburaya Productions is a fully integrated production, marketing, and events company.

Marvel Entertainment, LLC, a wholly-owned subsidiary of The Walt Disney Company, is one of the world’s most prominent character-based entertainment companies, built on a proven library of more than 8,000 characters featured in a variety of media for over eighty years. Marvel utilizes its character franchises in entertainment, licensing, publishing, games, and digital media.

Ultraman Makes Big Splash in the US …